The rainbow is an important symbol in most cultures dating back millennia.

In the Bible (Genesis 9:13) the “bow in the clouds” is an important symbol of the covenant between God and Earth.

In the legends of Australian Aboriginals, the Rainbow Serpent came from beneath the ground and created huge ridges, mountains, and gorges as it pushed upward. The Rainbow Serpent is understood to be of immense proportions and inhabits deep permanent waterholes.  It is in control of life’s most precious resource, water.

In Norse mythology, the rainbow connects the realms of the gods and humans.

The rainbow is a symbol of diversity and it has been adopted by the marriage equality campaign in Australia.  I support marriage equality because I think it will make a lot of people happy and I have seen no compelling evidence that it will do any harm.

Another reason I have for supporting marriage equality is that there are a lot of urgent problems confronting Australia, including a stagnant economy, energy supply, and climate change.  If we pass marriage equality into law, which is easy to do, we can then focus our minds on these other issues.

I have created a postcard to mark the magic and legends of the rainbow, as well as the diversity of Australians. – which should be celebrated and nurtured.

The postcard depicts the rainbow with one end on a termite mound at Cape Range national park near Exmouth in north western Australia (no pot of gold there).  It shows that the parliament and churches are overarched by the rainbow, as we all are.

The postcard can be purchased here. 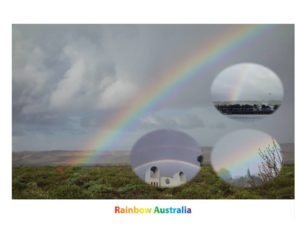