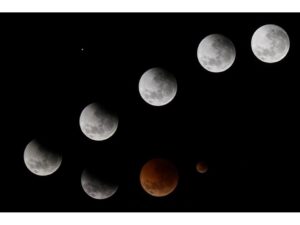 The total eclipse of the Moon over Melbourne encouraged me out of bed at 3.30am on 28 July 2018.  An alignment last seen over 1200 years earlier was the main attraction.  A very bright Mars was to accompany the Moon through a longer than normal total eclipse.

I was standing at my tripod-mounted camera taking photos of the early stages of the eclipse when I heard a rustle behind me.  Then a bird flew close to my head and perched on a nearby fence.  It was too dark for birds!  I shone my torch towards it and saw that it was an owl!  It flew away too soon for me to identify the species of owl, but I was pleased that it was in the neighbourhood and that I had seen it.

A rare eclipse and a rare sighting of an owl in suburbia!  What did this very rare conjunction mean?

It probably signified nothing, but my imagination had been stimulated.

The owl is associated with wisdom in most cultures and also with wealth in others, especially in India.  Whatever wisdom I may possess, I was certain that I was lacking in wealth.  Could this alignment of the moon, a planet, and an owl be a harbinger of changing fortune?  I hoped so, but understood that this was simply an unlikely random event – and they happen frequently!

What we experience in this world is so unlikely as to be almost impossible.  Out of the billions of stars, how many harbour life?  None that we have discovered yet.  Why is it that the Earth’s shadow is just the right size at the Moon’s orbit to eclipse the Moon?  Why is it that the Moon appears the same size as the Sun, despite the Sun being vastly larger?  The Moon is just the right distance away to totally eclipse the Sun when the astronomical geometry aligns.

The probability of these conjunctions is infinitesimal – no other planet in the solar system provides such events.  Likewise, the existence of life.

While all this is so unlikely that it seems like magic, what we are doing to our world has predictable consequences.  Extinctions, climate change, pollution of the air and the oceans, and the list goes on.  Yet we do nothing to stop the inevitable.

If only humans had the wisdom of owls!