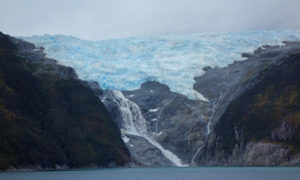 In June 2017, it will be 25 years since the first Rio Earth Summit.  Planning for that event started in 1989 and it was attended by representatives of 172 nations, 108 of whom were heads of state.  Amongst the many resolutions was a United Nations Framework on Climate Change which set out plans for avoiding dangerous climate change.

The Intergovernmental Panel on Climate Change (IPCC) was established in 1988 and has produced five detailed climate assessments (1990, 1995, 2001, 2007, 2014) each of them containing increasingly certain conclusions that human activity is affecting the climate and that the consequences for future decades are dire.  Thousands of scientists have contributed to these assessments.

Despite all this, not everybody believes that the climate is changing, or if it is, that human activity is responsible.  Not everyone believes the scientists.  In fact, not all scientists believe the majority of scientists.

Accordingly, politicians have not acted with sufficient resolve to implement effective measures to reduce greenhouse gas emissions.  The result is that the amount of the main greenhouse gas in the atmosphere, carbon dioxide, continues to rise and the rate of increase is not decreasing.

International agreements have been too weak and have not been universally supported.  US President Donald Trump has threatened to pull out of the 2015 Paris agreement, which came into effect in November 2016.

Federal governments in Australia (under Prime Minister Kevin Rudd) and the USA (under President Barak Obama) failed in their efforts to legislate the implementation of emissions trading schemes in 2009.

The trends in measured temperatures globally and the predictions of climate models suggest that we could pass the target of not exceeding 1.5 degrees Celsius increase on pre-industrial temperatures within 25 years.

If that is to be avoided, a very different approach to reducing atmospheric greenhouse gasses is urgently needed.

The book I am writing on this problem, Resolving Climate Change, develops a new strategy to address climate change.  I am seeking funding to assist in bringing the book to market.

The planned chapters of the book include:

·         A review of the empirical and theoretical evidence that human activity is causing climate change.  This includes analysis of trends in temperatures and the amount of carbon dioxide in the atmosphere.  Global and Australian data is analysed.

·         A breakdown of the contributing sources of carbon dioxide emissions in Australia and trends over time.

·         Analysis of the levels of support for several specific types of action to reduce greenhouse gasses.  This is mostly Australian data.

·         Development of strategies to mitigate climate change which are less dependent on the level of belief in climate change amongst the general public and politicians.

As well as seeking donations to cover the costs of additional research, writing, producing, and marketing the book, I will seek the inputs of donors in the form of opinions and assessments of strategic options.  This is optional and opinions will be analysed in total only to guarantee anonymity.  It does not matter whether you believe in climate change or not – your opinions are an important contribution to the resolution of climate change.  Contributors will receive a summary of this survey and first drafts of chapters.

Progress towards the writing and publication of the book can be monitored at www.climatefuture.com.au.  The book will be published anyway if my target level of funding is not achieved, but it will take longer.

I have been monitoring climate change and related opinions of the general public for over a decade.  I am a member of the Australian Meteorological and Oceanographic Society and attend their conferences.  I subscribe to Nature Climate Change.  I understand the science and the drivers of belief.

My company, foreseechange (www.foreseechange.com) has been tracking the level of belief in imminent global warming since 2005 – the longest continuous annual survey in Australia.  Analysis of this data, along with data from the Lowy Institute, the Climate Institute, IPSOS, and others in Australia, plus Gallup data from the USA appears in the book.  This data analysis identifies and quantifies the drivers of the level of belief in climate change and support for action. 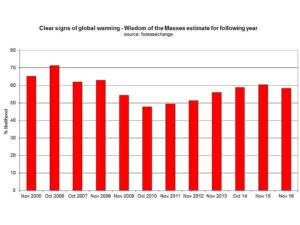 Prudent risk management requires that we take action to avoid dangerous climate change, whatever our beliefs about its existence and causes.  Fortunately, many actions to minimise the risk bring with them co-benefits and so are worth doing in their own right.  I seek your help to highlight the risks and co-benefits of action.  We cannot afford another 25 years of procrastination.

You can support this project at OzCrowd