Gail and Charlie’s field trip to Sumatra, May 2017

We had a very successful trip, which was both enjoyable and informative.  It also presented a few challenges.  We are in no doubt that the work of The Orangutan Project (TOP) in re-establishing a viable orangutan population is successful and worthy of support.  TOP also has projects elsewhere in Sumatra and in Borneo.  Details are available on their website. 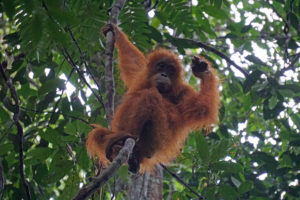 Orangutans have been extinct in central Sumatra for over a century.  The project, led by Leif Cocks as chief of TOP, has been running for 15 years and is based on 38,000 hectares of concession bordering a national park of 144,000 hectares.  They hope to take over another concession of 20,000 hectares.

A population of over 170 orangutans has been established.  These are mostly formerly captive animals who TOP staff have schooled in how to live in the wild.  The objective is to increase the population to 500 so that there is sufficient genetic diversity to support natural growth to 2,000.

There are also 150 elephants, about 40 tigers, some sun bears, and many other animals.  The Sumatran tiger is nearly extinct and this represents perhaps one-third of the total population left.  The elephants are tracked to minimise the risks to them and to minimise conflicts with local villagers.

They employ 200 staff working in a wide range of activities, including security.

There was no vehicle access to the Bukit Tigapuluh camp because heavy rain had caused some bridges to be damaged.  So after our six hour trip by car from Jambi, we had a four hour walk, carrying our backpacks, over a very muddy track and wading rivers.  It was hot and humid, plus we had been out of bed since 3am to fly from Jakarta to Jambi.  We were all tired by the time we got to bed.

We went out with technicians to observe recently released orangutans.  They use telemetry, which is enabled by a small transmitter attached to the orangutans, to track them.  This process goes on for three years after release, to ensure that they are thriving.  We saw several orangutans, including some who were no longer being tracked but came to observe us!

We were attacked by leeches from the forest floor, so we lost some blood. 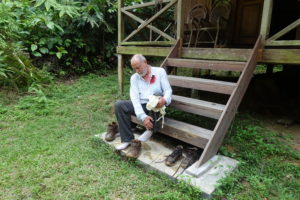 Three days later, we had the four hour walk out so that we could be transported to the orangutan sanctuary where jungle school is conducted, on the other side of the national park.  This is where orangutans are taught how to live in the jungle.  They are kept in cages and fed what they will eat in the wild, but they are released for several hours a day to learn about the jungle.  They are monitored by observers during this time.  They are also provided with enrichment, which develops their problem solving skills.

This photo shows construction of one enrichment activity, which hides fruit and bush honey in amongst leaves within a section of fire hose,  Many other enrichment designs are deployed. 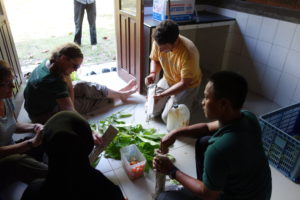 In the evenings, Leif Cocks provided interesting talks on the various aspects of the project.

A thief in the night

One night, at 12.30 am, Charlie heard something shuffling across the porch outside our hut.  Then there was something banging a short distance away.  It was a clear night with a full moon.  In the shadows of the trees, an animal was banging something onto the ground.  It looked like an orangutan so Charlie woke Gail to have a look.  She thought it unlikely that it was an orangutan because they sleep in their nests in the trees at night.

A short while later, there were more noises outside and the animal was closer and not shaded by the trees.  It was carrying a sheet of some material in one of its feet.  Charlie called Gail again and it was agreed that it was an orangutan.

Next morning, we found one of our neighbour’s boots on the track and Gail’s poncho also, that was what it had been dragging along.  We had left waterlogged boots and clothes on the porch to dry.  We had also left small containers of sunscreen and insect repellent.  These too were on the track – they had been opened and a finger had clearly explored the contents.

Coming back from breakfast, we noticed a muddy handprint on our neighbour’s door.  It was clearly left by an orangutan.  The doors were not locked. 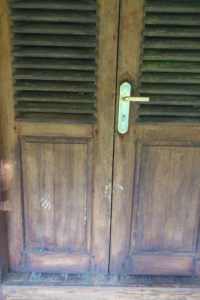 The full moon plus a clear sky had provided an opportunity for exploration and mischief.

Palm oil plantations are destroying what little forest is left.  We knew this, but did not know that plantations for paper are also increasing rapidly.  This means we must reduce demand for both palm oil and paper.  About 80% of the Sumatran forest has been lost to plantations and (mostly illegal) logging.

Leif Cocks is looking to establish rainforest shade grown coffee so that locals can make money from the forest while orangutans can still live in it.

There are rubber plantations and orangutans can survive in these, so long as a range of food trees are also established (green rubber?).

This visit confirmed that orangutans are our closest cousins.  They are very intelligent and capable of learning at all ages.

Overall, we were heartened by the work of TOP.  It is increasing the orangutan population and both protecting and expanding habitat for orangutans and other threatened animals.

The forest is vibrant with a diverse range of flora and fauna living in a symbiotic relationship. 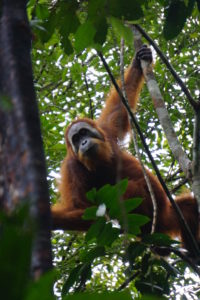