Gail and I left Melbourne on a 6am flight on 11 August 2019, bound for Vanuatu via Brisbane.  There had been an Antarctic blast over south eastern Australia for several days and we were glad to be escaping from it.

Gail had told me of a news report which, in addition to describing the freezing weather, also mentioned that there were unseasonal winter bushfires in New South Wales.

As dawn broke, with us above the roiling clouds of the tempest, all was calm.

About 80 minutes after take-off we were reaching the boundary of the clouds.  Between breaks in the cloud I could see snow on the ground.  I estimated that we were above northern New South Wales, not far from the coast.  Rare snow indeed! 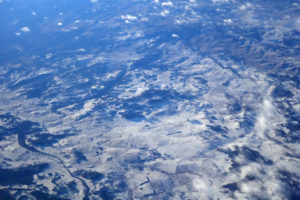 As I looked down on a snow covered village, I saw smoke from bushfires in nearby hills.  I also saw beaches beyond the plumes of smoke.  The fires were in remote country and so were probably not controlled burns.  It was a very worrying picture given the season. 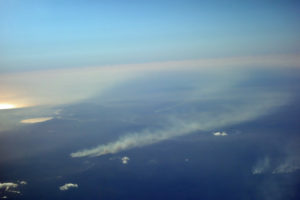 The tempest would soon yield to conflagration.