The COVID-19 pandemic makes the case for the Melbourne Airport link to run via the Upfield line.

First, we don’t know when air traffic will return to previous levels.  It may be one year or five.  It will eventually recover, but in the meantime the economic case for building according to the existing plan is weaker as it offers little in the way of co-benefits.

Second, the Victorian government (and the federal government) will be cash poor after spending billions to minimise the economic damage of the pandemic.  They will not be able to afford both the airport link and the Melbourne suburban rail loop which is due to commence construction in 2022.

The Upfield line, which includes Fawkner, is very crowded now and there is only one train every 18 minutes at peak hour.  The extra train services would provide a better service on the Upfield line.

Construction of a sky rail section of the Upfield line will be completed in 2020, removing level crossings at Bell Street and Moreland Road (plus two on less busy roads).

The link between the airport, Broadmeadows, and Fawkner would also be the first stage of the suburban rail loop.  Subsequently, connections can proceed east to Reservoir and West to Sunshine and then on to other lines.  This provides an enormous co-benefit because it connects radial suburban lines, reducing the number of people going into and out from the CBD on crowded lines.  It also provides access to the airport for travellers on the Wodonga and Shepparton lines.

Lets get started and remove the problem of the missing airport to city link, while reducing traffic on the roads, and providing the first stage of the much needed suburban rail loop. 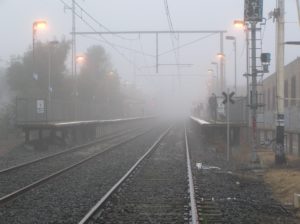