With COP26 in Glasgow just days away, Australia’s government is still prevaricating over a 2050 target and a 2030 target.  After eight years in government it is the states, private enterprise, and individuals who have got on with the job of reducing greenhouse gas emissions.  But now is the time for the federal government to belatedly join in with targets, strategy, and guarantees of achievement. 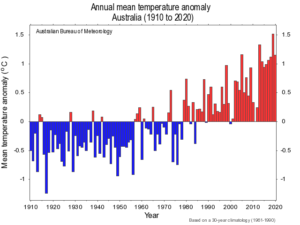 Australia has suffered significant damage during the last peak in 2019, which resulted in tragic, extensive bushfires in 2019-20 with much loss of animals, vegetation, and property.

Australia must not do just its share – it must do much more than its share because it will be so badly scarred otherwise.

To cut or not to cut, that is the question
Whether ‘tis nobler in the mind to suffer
The heat and drought of a changing climate
Or to take arms against more fossil fuels

May WS forgive me.